The Santa Cruz Trek is a popular 4 day trek through the Cordillera Blanca mountain range, close to Huaraz in Northern Peru. The Cordillera Blanca is one of the most concentrated collection of sky touching mountains in all the world, with 33 summits reaching 5,400 meters or over. This trek takes you through this environment and is one of the most visually pleasing hikes we have ever done! Read below for some tips on what to expect. 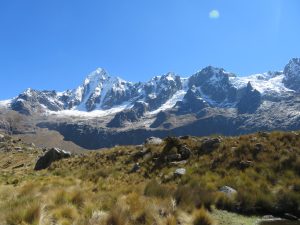 How to Start the Santa Cruz Trek

You have two choices when deciding to hike the Santa Cruz Trek; you can book with a tour agency, or you can do the trek yourself. Doing it the DIY method means you have to bring your own tent, sleeping bag, sleeping mat, cooking stove and of course food and clothes for the 4 days. This sounded just as expensive (and heavy) to us and so we decided to book with a tour company. To book the Santa Cruz you will need to make your way to the city of Huaraz, which lies 400km to the north of Lima. Huaraz is the capital of the Ancash region of Peru and has some stunning surroundings, you can see some of the snow capped peaks of the Cordillera Blanca from the city! Huaraz lies at an altitude of 3052m and so if, like us, you have arrived from the coast, spend a few days to catch your breath and do some acclimatization before attempting the Santa Cruz trek! 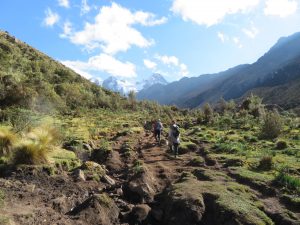 In terms of tour companies in Huaraz there are many companies for the Santa Cruz, all with differing prices. Some companies offer the package for 400 soles, others can go as high as 800 soles. On trips like these you get what you pay for, we have heard stories of people paying 400 soles and getting bad sleeping bags and not enough food on the trip – stuff like this just ruins your experience! We ended up booking with Caleb Expeditions; who charged us 500 soles each, and we were very happy with their service. They had very good equipment, delicious food and a great guide. Best of all there was only 8 in our group so we weren’t overcrowded!

What to expect on the Santa Cruz Trek

The Santa Cruz Trek is a 4 day/3 night trek and we would describe the difficulty as moderate. It is all at high altitude and so it is vitally important to get sufficiently adjusted. If you do, then you will have no problems! I have drafted some key points below on what we covered during each day of the trek.

Day 1 of the trek see’s you being picked up from your hostel in Huaraz between 5 and 5.30am. The drive to the town town of Vaqueria (the starting point) is long and goes by mountainous, windy roads. On the way you will stop at Llanganuco lake for a picture at 3850m (if you have done Laguna 69 you will have stopped here on that day trip also). You will also pass the Portachuelo Pass, which is the highest point of the trip, standing at 4,767m. Here you will have the chance to take some pictures of the amazing landscape. 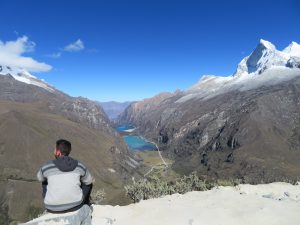 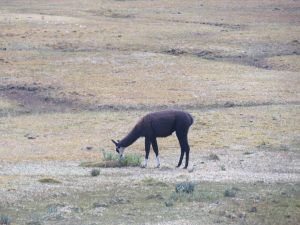 You are in Peru – so llama’s are about!

After lunch in Vaqueria its time to shake off the cobwebs from the long bus journey because you now start the trek! The trek starts with some downhill, before going up abit, through the villages of the Huaripampa valley and then it is relatively flat after this. This day was our least favourite of the trek, its quite uninteresting with not much to see. You will eventually reach the entrance to the Huascaran National Park and you have to pay 60 soles, which is included in the tour price. The day’s trek ends with a walk through a field that has some llamas, before you settle on the camp for the night in Paria. This campsite was the most spectacular of the trip and stood at 3870m . We had it to ourselves and there was some amazing views of the Cordillera Blanca in the background. The stars that night were insane! 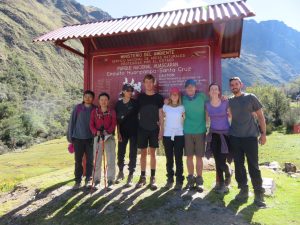 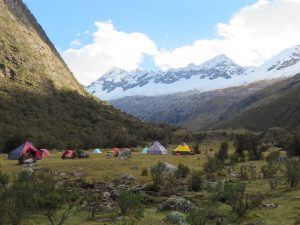 Our camping base that night – amazing!

Today is the day that you will reach the highest point – Punta Union! We were woken up with some hot coca tea before breakfast at 6.30am. We then set off on a short incline, with some stops for photographs along the way. The first couple of hours are not too strenuous, but eventually you will reach the Punta Union Pass. Climbing the pass is hard, and is the hardest uphill you will have of the entire trek. We made a stop three quarters of the way up in order to have lunch (the chef had to carry all our food and she was getting really tired). After that we made a final push and reached Punta Union – standing at 4,750 meters! We could take some pictures of the amazing sites – the valley we had just climbed through, the lake at Punta Union and the surrounding areas. Then we set off, all downhill (2 hours) to our campsite for night 2 at 4,250meters – Taullipampa. 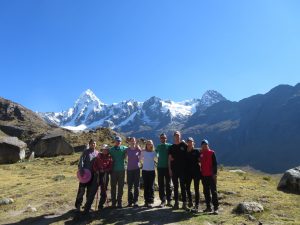 The scenery on Day 2 will blow you away 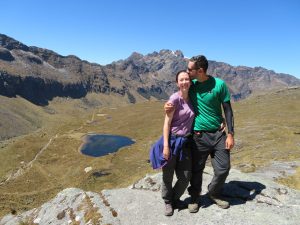 Apparently this is the lake of love – the lake is shaped like a loveheart! 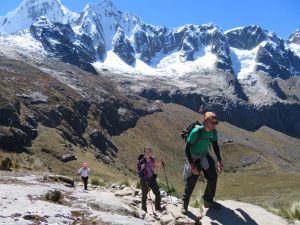 Getting up over the pass was no easy feat 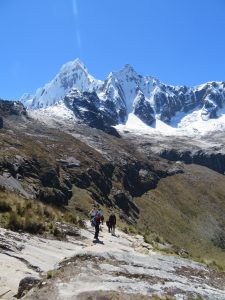 Up and over this way! 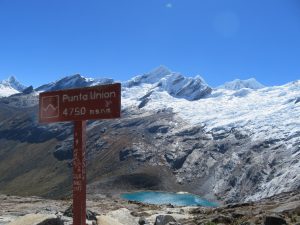 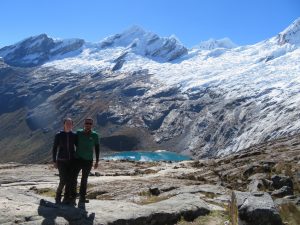 All the effort is worth it for views like this

This day is the longest and, in my opinion, the hardest of the trek. You get coca tea and breakfast before setting off again for the day. The first destination for the day is the Alpamayo base camp, where we had a look at the mountain. It was once said to be the “Most Beautiful Mountain in the World” and, to be fair, its pretty nice! 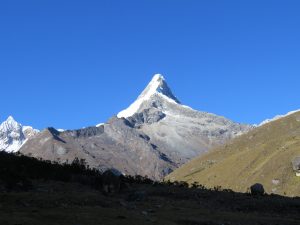 Alpamyao – “The Most Beautiful Mountain in the World”

Amazing scenery on the way 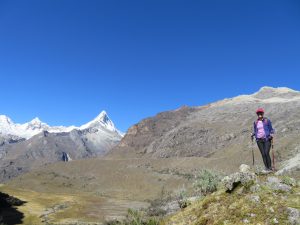 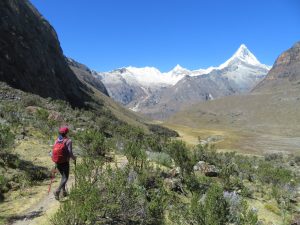 After a nice steady start to the day we started an uphill climb to Laguna Arhuaycocha at 4,420 meters. Peru has a lot of amazing lakes (this region of Peru in particular), and this one is no different. We had some time to take some great pictures and relax before heading back down, past Alpamayo base camp and a little further then our camp from last night. This downhill was tough and long and took some energy to get through! 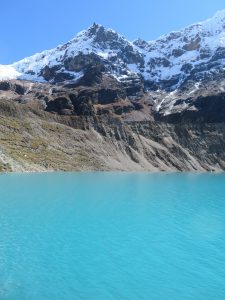 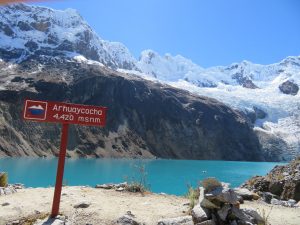 The next section of the day was called “The Desert” and its one that we will never forget! It was tough and long, it felt never ending. At this stage we had been hiking for some 5/6 hours and the desert took us at least another 1 hour and a half. It didnt help that the guide told us it would take 20 minutes. It was pretty much flat all the way (we had to walk along the Santa Cruz valley) but it was pretty hot. When we stopped for lunch we were dismayed to learn that it was by the river – with no shade! “The Desert” – an absolute killer

We then had another 2-3 hours of walking after lunch, mainly through bog like fields with different lakes all around us. We were all really relieved to reach camp that night at Llamacorral which was at 3,760 meters!

The final day of the trek! This day is all downhill, walking from 3,760 meters to Cashapampa at 2,970 meters and takes about 3 hours. The way is really steep and dusty so it isn’t really pleasant but there are nice views of the valley below! Its also really hot, the hottest day of the trek! When you get to Cashapampa you will have lunch (and a beer like us) and then begin the long and tiring bus ride back to Huaraz! 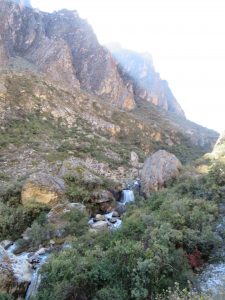 The last day involves going downhill along this river 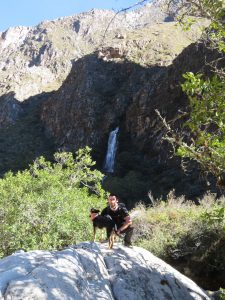 We managed to make a dog friend!

Tips for the Santa Cruz 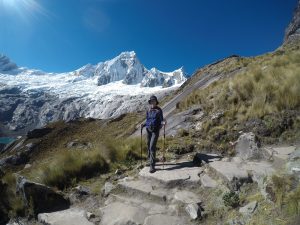 […] lakes and barren dry lands are all visited during the trek. We wrote a comprehensive guide here, so check it […]

Top 5 things to do in Filandia

One stop guide for hiking the Cocora Valley